The World Society for Pediatric and Congenital Heart Surgery has accomplished much since its establishment in 2006. We have organized highly successful Scientific Meetings held around the world from Washington, USA in 2007, to Cairns, Australia during the 5th World Congress in 2009 and Istanbul in 2011. Not to mention our World Summit on the status of pediatric cardiac surgery services and education in Montreal, Canada in 2008.

In an effort to reach out, the World Society has also organized in collaboration with other organizations several joint and regional meetings, such as the ones held in July 2010 in Antigua, Guatemala, in October 2010 in Shanghai, China and in March 2012 in Lima, Peru. During each of these meetings a major cardiac malformation has been covered in depth, "from A to Z", such as tetralogy of Fallot, atrioventricular septal defects, univentricular hearts, heterotaxy, transposition, corrected transposition, anomalous pulmonary venous connections and other venous anomalies. Speakers and attendees to these symposia have not only been congenital heart surgeons, but also pediatric and adult cardiologists, pediatric cardiac intensivists, pediatric cardiac anaesthesists, cardiac morphologists, cardiac nurses, perfusionists etc... The World Society has also provided support to scientific meetings held in Johannesburg, South Africa, organized by the Walter Sisulu Pediatric Cardiac Center for Africa. 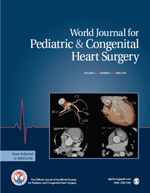 A major accomplishment has been the establishment of the World Journal for Pediatric and Congenital Heart Surgery in 2010. Led by its brilliant Editor, Marshall Jacobs, our Editorial Board has a truly global representation from all continents and related specialties. The WJPCHS is the first scientific journal dedicated to the advancement and dissemination of knowledge of the surgical management of pediatric and congenital heart disease. WJPCHS publishes original scientific articles, case reports, expert techniques, new technology evaluations, current or historical reviews, and relevant commentaries. Furthermore, the WJPCHS has also published proceedings of the various meetings organized by the World Society, as well as meetings organized by other organizations. The WJPCHS has, in a very short time,

become a significant educational tool with a global reach. The WJPCHS has been accessible on line for free for non-members for the last 3 years. However this privilege will be coming to an end at the end of 2012. The most efficient and economical way to continue to receive the WJPCHS and have access to it is to be a member-in-good-standing of the World Society, which means being up to date with payment of membership dues.

The World Society has been a real catalyst in bringing together pediatric and congenital heart surgeons and their colleagues from related specialties from all parts of the world. This increasing unity and interaction among colleagues on a global level is based on participation and mutual respect. It fosters new relationships and friendships, and will hopefully contribute to greater education and ultimately help improve care for children born with congenital heart disease all over the world.

Over the next several months, we will be working on improving communication with our members and on ways of making the World Society more accessible. We are developing a new, more informative website with an improved, intuitive design. Your opinion is valuable and we will be seeking your input on a number of issues on a regular basis. The 2013 World Society Annual Business Meeting will be held during the 6th World Congress of Pediatric Cardiology and Cardiac Surgery to be held on February 17-22, 2013 in Cape Town, South Africa. Then for 2014, we urge you to plan on attending the World Society 4th Scientific Meeting that will take place on July 17-19, 2014 in Sao Paulo, Brazil.

In a short period of time, The World Society has become the largest organization in the world of pediatric and congenital heart surgeons and their colleagues from related specialties. This has only been possible through the vision and hard work of its leadership and the commitment of its members. The World Society needs your ongoing participation and support in order to be able to continue its important work.

So, how can you help?

You can do that by being an engaged member, bringing new members on board from among your colleagues and younger associates, attending our scientific meetings, supporting your World Journal for Pediatric and Congenital Heart Surgery and by paying your dues.

The World Society needs you now more than ever!